Apple has dropped a new iPhone SE on the market today. It’s a 4.7” iPhone with a physical home button, Touch ID, a single rear-facing camera and the A13 Bionic chip on board. With a $399 starting price point, the new SE is aimed squarely at new iPhone users or first-time smartphone buyers, but could appeal to those who want the smallest iPhone model currently available above other considerations.

It comes in black, silver and Product(RED) editions and features a single rear-facing camera and a single front-facing camera. This is Apple’s new entry-level iPhone.

The overall package is pretty appealing here. It’s got the same A13 chip as in the iPhone 11 and iPhone 11 Pro and Apple tells me that the processor performance in the SE is comparable and not toned down for the more affordable unit.

The display is Apple’s Retina HD unit, which is an LCD panel. It is not a Liquid Retina display like the iPhone 11 and iPhone XR. I’m still waiting on specs to see what we’re looking at from a contrast ration perspective here, but it does have True Tone.

Probably the biggest defining feature of the iPhone SE besides its size is its inclusion of a physical home button with Touch ID instead of the Face ID system we’ve come to expect on new iPhones. It’s not clear now whether that’s due to size constraints preventing the inclusion of the needed front-facing True Depth Camera array — but pricing is probably just as likely to figure in this calculation.

Touch ID is reliable and even preferred by some users. I prefer Face ID in a big way, but in our new mask-using world, some groundswell of Touch ID enthusiasm has been gaining. It’s hard to make Face ID systems properly recognize you behind a cloth wrap covering half of your face. This has been an issue for a while in Asia, where mask wearing has long been a matter of courtesy during allergy season or when a person is ill.

The iPhone SE is also dual-sim-enabled, which should please travelers or users in regions where wireless service choices are plentiful.

A couple of main items make Apple’s claim that the iPhone SE is “the best single-camera system” supportable. You may recall that the iPhone XR also supported portrait mode and had the same resolution of rear camera. But with the iPhone SE, you have the A13 bionic, a new ISP and the Neural Engine that have improved things significantly in the machine learning department — allowing for segmentation masks and semantic rendering, two big improvements that make the portrait mode far more effective in recent iPhone models.

Apple only supported three lighting effects on the XR — the ones where you didn’t have to strip away the background. Those require more beef in the rendering and separation pipeline, so the iPhone SE can do those now. The iPhone SE also has the improved Smart HDR that came to the iPhone 11 — once again tied to the chip.

You also get a bunch of other benefits of that new image pipeline, including expanded dynamic range while shooting video at 4K 30fps, 4K 60 cinematic stabilization and the improved smart HDR while shooting still images. It also brought all six lighting effects to the front-facing camera in this model.

It’s like you’re getting iPhone 11 Pro image pipeline attached to a single-camera system — but, and it’s a big but — you don’t get Night Mode. Night Mode is one of the most compelling iPhone camera features in a very long time, so buying the new SE is really a price and size over camera equation. 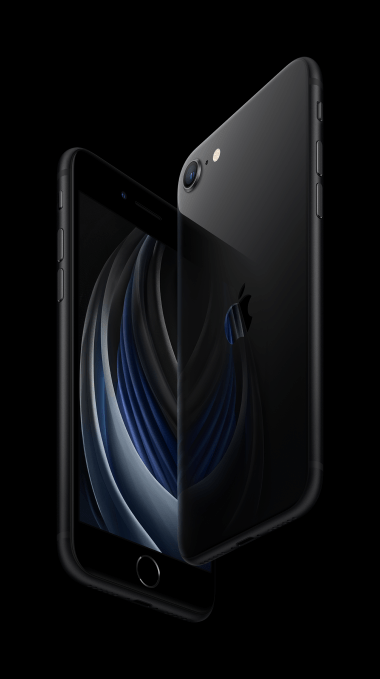 This lineup puts the current iPhones Apple produces at roughly* seven as far as I can tell: iPhone XR, XS and XS Max, iPhone 11, iPhone 8 Plus and iPhone 11 Pro, iPhone 11 Pro Max and this new model. Apple will cease selling the iPhone 8 with this release, and will sell the iPhone 8 Plus in certain regions until channel inventory is exhausted. The iPhone SE’s pricing is incredibly attractive at $399 with 64GB of storage with only a $50 bump to $449 for 128GB. The 256GB model runs $549.

If you’re comparing the iPhone XR to the iPhone SE, your only real consideration for the older model would be that you must have the larger screen size. But that seems like a hard sell at $200 more.

Overall, Apple seems to be working hard to mortar over the gaps in its iPhone pricing umbrella, making entry into its ecosystem more attractive. Once in, iPhone users tend to stick for the most part, both because of service-based lock-ins and high customer satisfaction.

*I say roughly because analysts I trust say there’s a possibility some iPhone models are still made in regional factories.