A service that connects people to Wi-Fi hotspots for free turned out to be one of China’s most popular apps, nestling in the top ranks with Tencent’s WeChat messenger and Alibaba’s digital wallet affiliate Alipay. According to a report from app tracking service App Annie, WiFi Master Key was China’s fifth-largest app and the world’s ninth largest by monthly active users in 2018, titles it also held in 2017. 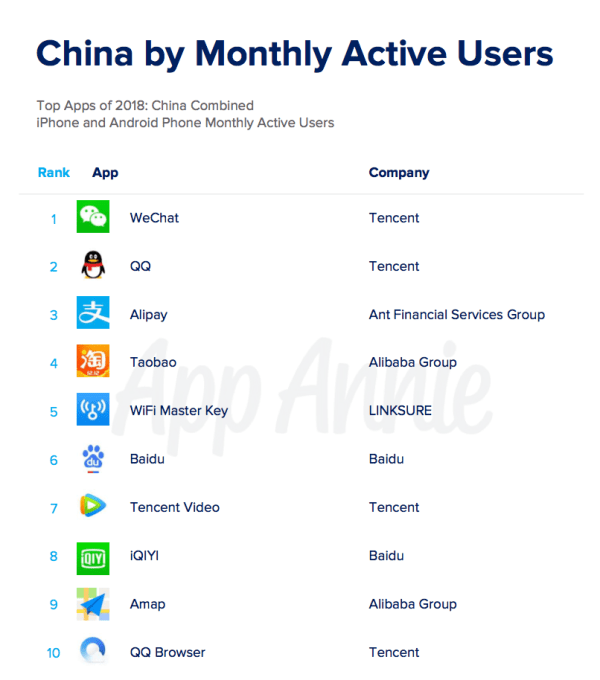 The aptly named WiFi Master Key, which owns the enviable domain wifi.com, is the product of a little-known startup called LinkSure in Shanghai that gets people onto the nearest wireless networks without the need for passwords. In addition, the app also recommends news and video content based on users’ past habits to lock them in, a feature similar to that of ByteDance’s algorithm-driven Jinri Toutiao news app.

Like many consumer-facing services in China, the app is free to use and monetizes traffic through advertising. It claims 700 million MAUs in China and another 100 million around the world. WeChat and Alipay, by comparison, each has around 1 billion MAUs worldwide.

The internet connectivity service helped LinkSure secure $52 million from a Series A round and value the parent at $1 billion back in 2015, only two years after the firm had launched. LinkSure has not announced further fundings since then and has kept a relatively low profile, though its founder Chen Danian was a household name from China’s early internet days. Along with his brother Chen Tianqiao, Chen founded Shanda Games, once China’s largest operator of online games before the rise of Tencent.

In November, Chen resigned as LinkSure’s chief operating officer as former Shanda executive Wang Jingying took over the reins to become one of the few prominent female CEOs in China’s tech sector.

The idea of freeloading on strangers’ networks strikes one as dodgy (or too good to be true), but the reality is more nuanced. WiFi Master Key keeps a database of passwords while it encrypts and hides them from users, the company explains on its site. How does it collect all the credentials in the first place? Well, every time someone uses it to key in a login, the internet access app transmits that piece of information to the cloud. When people use it to, say, enter the Wi-Fi passcode a barista just gave them, the data gets stored and shared to whoever at the cafe uses the app. 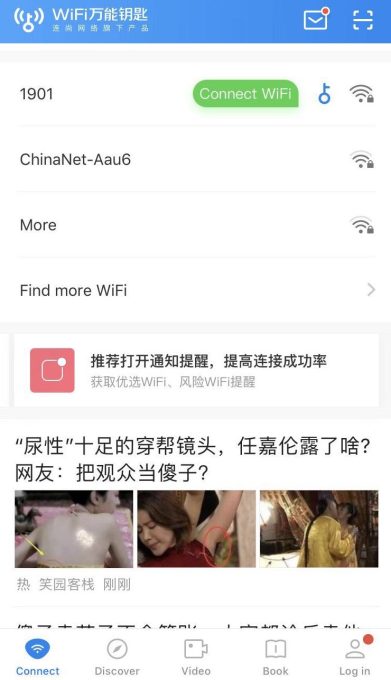 Those inner workings enable the app to bill itself as a Wi-Fi “sharing” service and distance itself from anything that’s remotely a hack. But its data practice still draws concerns over user privacy. Last April, the Chinese state television broadcaster ran a 25-minute feature lambasting the app for “stealing passwords.” That was followed by an industry-wide crackdown from the state’s cybersecurity watchdog on all Wi-Fi crowdsourcing services with lackluster security practices.

LinkSure rebuked the state report and said it always asked for user consent before gleaning their data. Chances are few people read the lengthy terms of use on any kind of apps in real life, and the less digital savvy may fail to grasp how the app actually works. A major source of debate is when users inadvertently make their house Wi-Fi publicly available after giving the credentials away to a guest who happens to use the data-ravenous app to access the host’s network. WiFi Master Key has not responded to emailed questions about its security practices.

Aside from enabling strangers to crowdsource Wi-Fi, LinkSure has also joined hands with two major Chinese telecommunication companies to offer a separate broadband card with appealing data plans. That puts it in competition with Tencent, Alibaba, Baidu and other tech firms that are working with big telcos to provide cheap or unlimited data, enticing people to use their in-house apps.

Meanwhile, LinkSure is eyeing to beam down its own internet connection from space as SpaceX and OneWeb do. The plan is to target the next few billion rural users who are just coming online and live in areas currently uncovered by terrestrial networks. LinkSure says it’s aiming to provide a free satellite network around the world by 2026, with the first of a constellation of 272 satellites bound to launch later this year.

A government-backed report put the number of people with internet access in China at 802 million in June, leaving nearly 600 million who are still unconnected; 30 million people came online for the first time last year, including an expanding base of elderly users who are increasingly embracing Alipay and WeChat to go about daily lives.